(Editor’s note: In  the recent https://rdhgreatstories.com/2019/01/19/authors-books-differ-on-top-sf-film post, the picks of outstanding SF films by the authors of “Must-See Sci-Fi: 50 Movies That Are Out of This World,” “Top l00 Sci-Fi Movies” and “101 Sci-Movies You Must See Before You Die” and this writer were listed.)

Following the posting of a story about three books authors’ choices for the outstanding/best/favorite science fiction movies of all time, we asked a couple dozen people what they thought about the lists and what they might add or subtract.

We received some fascinating responses:

Joel Zakem, a currently retired attorney, is  a longtime SF enthusiast who has been attending conventions for more than 50 years.

“Even though I have not seen any of the books, I will make a few observations. None of the lists appear to have mentioned ‘Bride of Frankenstein’ which, in many ways, is a stronger film than the original,” Zakem said. “On the TCM list, I would not included ‘Barbarella’ and I thought ‘Terminator 2’ (mentioned in both other books) is a better film than the first one.

“Other than that, I have no real problem with what TCM included, but I would have added ‘Quartermass and the Pit’ and ‘The Road Warrior.'”

Zakem said that he would not have included Star Trek  and isn’t sure he would have included any Star Wars movies, even though he says they are important.

Keith Bradbury, owner of the  Who North America store in Camby, Indiana, said he was disappointed that “Tron” wasn’t included in the TCM book.  “I consider it to be one of the best Sci Fi movies because it contrasted faith vs. statism in a computer context,” he said.

Others he felt worthy of inclusion were “The Island” and “They Live.”

Bradbury said, “I do agree with much of the list. If I were going to do a rundown of my favorites (skipping the Flash Gordon serial), I would go: Metropolis, Things to Come, Forbidden Planet, Star Wars, Empire Strikes Back, Tron, They Live, The Island, Blade Runner, The Fifth Element, Logan’s Run, Planet of the Apes (original ONLY), Interstellar, 2001 (off the top of my head).”

Leanna Rogers, a nurse, said,  “I really enjoyed your writing on this. I especially enjoyed that you included a lot more modern Sci-Fi films as well.

“I feel like the two lists that are compared really glossed over sci-fi films from 2000-present. I also really enjoyed the segment about era specific sci-fi and how the films’ themes reflect the fears/concerns of the times in which they were made, especially for young(ish) fans like myself who didn’t experience those eras firsthand.”

Rogers said if she were adding films one would be “Battle Royale” and a  “Scanner Darkly. “I believe it wasn’t very well received so it might not be as iconic as the other films on this list … I’m biased because I love Philip K. Dick.”

Culp said, “I  have a hard time with the TCM people including ‘The Matrix,’ but not the full Matrix series (assuming that is the case). The first one can stand alone, but it is really helped along by the other two installments.”

Mike Rittenhouse, a musician in the band Five Year Mission and the owner of Hero House, said, “I believe I have the ‘101 Sci Fi’ book. And I agree that there are many films that are included/not included that I disagree with.

“But, in the end, it is just an opinion by the author. Not a definitive list. I find it interesting that the first book you mention completely overlooked Star Trek. Seems like a blatant use of author’s opinion vs. common opinion. Overall, an interesting article about the difference in books and opinions.”

Tracy Canfield, a published science fiction author and linguist capable of translating and speaking Klingon,  said, “I’m glad Schneider mentioned ‘Primer’ – it’s rare to see hard SF in movies, and Primer is a great film from beginning to end. I’d also include Shane Carruth’s second film, ‘Upstream Color,’ on my list of great SF movies.  … I recommend Upstream Color, but I have to warn you, it’s a lot of work.”

“Gattaca” is a great science fiction film too, she said.

“At the risk of contradicting myself, I might include ‘The World’s End’ on my own personal list. It’s a science fiction film by Edgar Wright and Sean Pegg, who are better known for movies like Shaun of the Dead. …’Dark City’ is a wonderful movie that didn’t seem to make anyone’s list. It would certainly make mine, though.”

Canfield said she would pick “Looper” over “Arrival,” which she says “has an equally implausible premise, and a distractingly weird idea of what linguistics is. …

“If I were making a list, I’d include a movie none of the other authors did: ‘Being John Malkovich.'” 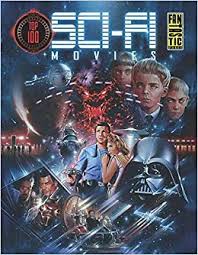 Wendy Carson and John Belden, co-hosts of PlaysWithJohnAndWendy.com, issued a combined response to the lists.

“I agree that it is incredibly difficult, if not impossible, to come up with a top-100 science fiction films of all time list,” they said.  “All I can do, in seeing the attempts cited, is list some ‘what-abouts.’

“If we can list Charlton Heston’s ‘Planet of the Apes’ and ‘Soylent Green,’ what about “Marathon Man,” the original film version of “I Am Legend.”…

“The ’80s had more than just Star Wars knockoffs. ‘Enemy Mine’ should be counted among the greatest SF films of all time — two excellent actors at the top of their game, and a timeless message. If you looked beyond the comicbook-pulp fun of the original ‘RoboCop,’ there was timely and biting social satire that elevated the whole work. ‘Alien Nation’ was such a great allegory that it was spun off into a TV series.

“And despite SF gadetry, no one is mentioning ‘Ghostbusters’ or ‘Honey, I Shrunk the Kids.’ And let’s also note that if it weren’t for its MCU ties, ‘Guardians of the Galaxy’ would definitely be on the lists. “

Dan Carroll, director of media engagement at Dragon Con, said, “I am not one to impose my views on someone else’s list. I mean…lists should always be about favorites…not ‘best'”

Martin Ross, a retired journalist, said, “I liked the Gerani/Schneider list better, but then I’m a big fan of ‘50s-60s British sci-fi/horror, especially the Quatermass films, Five Million Years to Earth, and the original Village of the Damned (TMC’s preference for the sequel was a head-scratcher).

“I’m glad they also added more obscure oddballs like ‘Primer’ (I’m a sucker for time travel, though not always a found footage fan — the Statue of Liberty scene in ‘Cloverdale’ being an exception). …One of my personal favorites, though a bit slow in places, is ‘The Medusa Touch’ with Richard Burton, which leans toward horror but that offers a couple of semi-blower apocalyptic sci-fi touches.”

David Ross, actor, movie maker and former library director, said, “Some of my favorites are usually not the most popular or acknowledged, but I have no real argument with those chosen since Sci-fi has such wide fringe areas and people’s opinions may differ from mine, but I don’t care enough to argue. …

” I do think that George RR’s ‘Nightflyers’ movie was not as bad as the critics said. I actually found it more engaging than the Sy-Fy channel’s big budget interpretation.”

John T. Adams, a longtime association executive and former newpaper editor, said, “I haven’t seen all the films you mention, but I agree with you about the omissions of some of the more recent films. But maybe they’re too recent to make any of the published lists.

“I think one of the landmark films, since you mentioned the Cold War, is ‘The Day the Earth Stood Still,’  which is forward looking for its time. The alien is a good guy (not a space invader), and after failing to detain him the Americans mount a chase through D.C. and try to kill him. That’s not a typical Cold War plot. …

“If a flying saucer arrived today, would we try to shoot it down? Of course, there’s always ‘Men in Black’ and ‘Independence Day,’ where the aliens ARE the bad guys. And don’t leave out the zombie movies. Instead of the undead running down the streets, think of a horde of Mexican rapists, murderers and gang members. One could argue the zombie movies are inherently racist because we demonize The Other. “

Author John F. Allen said, “I think the choices are appropriate for their eras, although, I agree with certain ones you mentioned, which were excluded.”

Randy Porter works at IUPUI and has been very involved in SF-related events for decades including Gen Con.

Porter says he thinks a film has to be at least 20-years old to be considered a classic.

One of the films on the lists that caught his attention was “The Forbin Project.”

Porter said, “I haven’t seen it in forever. I love it. It would be worth a remake.”

“La jetee,” a short film that chiefly uses still images and narration to tell its story, is listed in two of the three books.

Other films that Porter might put on his favorites list include “2001: A Space Odyssey,” “Buckaroo Bonzai,” “Demolition Man,” Ghost in the Shell” (Japanese/UK verion), and “Dune.”

“My favorite right now is ‘The Fifth Element,” Porter said.

“Delicattessen” and “Zog” also are worthy of attention, he said.

Porter would like to see more movies where science isn’t the bad guy.

“There are few movies where science isn’t the bad guy,” he said. “In Hollywood, the idea seems to be that technology is bad. Most people writing movies in Hollywood have no experience in technology.”

For many people, SF films, however, have been increasingly impressive.