By the early 1950s, movie studio executives realized that television was a real competitor and they needed to take action to bring audiences back into the movie theaters.

The Turner Classic Movies documentary series “Moguls and Movie Stars” includes an episode on the period from 1950 to 1960 titled, “The Attack of the Small Screens.” Cinerama, Cinemascope and 3D were among the innovations the studios tried, but the solution was big stories told on the big screen in powerful ways.

Several of those big stories hit the big screen between 1953 and 1957.

“From Here to Eternity,” 1953, directed by Fred Zinnemann.

“From Here to Eternity” is a prime example of powerful film-making in the mid-1950s.

This Oscar Best Picture winner draws from the deep well of memories and emotions tied to the days before and day of the bombing of Pearl Harbor as well as its immediate impact. It’s a story of romance, ill-fated affairs, ladies of the evening’s hopes for the future, the military life, the masculine lifestyle and occasional cruelty of the early 1940s, all drawn from the 850-page novel by James Jones.

And, of course, it leads to the day that President Franklin D. Roosevelt referred to as “a day that will live in infamy,” the day of the surprise attack (at least to most people) on Pearl Harbor.

This film includes one of Frank Sinatra’s finest performances and it’s a non-musical role for the legendary singer. Others in the outstanding cast include Burt Lancaster, Montgomery Clift, a gorgeous Donna Reed and many others in relatively minor roles who would become much better known over the years.

The Oscar Best Picture honor was a great choice by the Academy. Other contenders included “Julius Caesar,” “The Robe” and “Shane.”

The strikingly powerful, Oscar-winning “On the Waterfront” featured Marlon Brando’s greatest performance in a career filled with outstanding acting.

This story is about a dock worker who believes he could have been a champion boxer, but now is subject to the whims of a mob-run union* with which his brother has strong ties. Now, he faces major moral decisions.

Brando’s character is pulled in different directions by people including union bosses (including his brother) who want him not to talk to Congressional investigators and by a Roman Catholic priest and a love interest who want him to testify at a hearing.

Other contenders for the Best Picture award included “The Caine Mutiny,” “Country Girl” and “Seven Brides for Seven Brothers.

The Oscar-winning picture “Marty” was a nice, relatively small movie compared to the other four films that won that award between 1953 and 1957. The competition for the award wasn’t as strong as in some previous years.

The story was adapted for the big screen from a television play written by Paddy Chayefsky. It is a story about a Bronx, N.Y., butcher played by Ernest Borgnine who unexpectedly finds love. He escapes family squabbles and finds the strength to escape from what he believes is a meaningless existence.

Borgnine won the best actor Oscar for his sensitive performance. Also in the cast were Betsy Blair, Joe Mantell and Esther Manciotti.

Other contenders for the 1955 best picture Oscar included “Love is a Many Splendored Thing,” “Mr. Roberts,” and “Picnic.”

Around the World in 80 Days, 1956, directed by Michael Anderson.

“Around the World in 80 days” is a rollicking, Oscar Best Picture winning adaptation of the Jules Verne novel. It’s a lot more fun than many Best Picture winners, even though some critics claim it has lost much of its charm over the years.

David Niven heads up the extraordinary cast that includes some new stars in major roles and several existing stars in cameo roles. The other stars in this film included Shirley MacLaine in another breakout role (after winning a Golden Globe award earlier for her part in The Trouble with Harry), the outstanding comic Cantinflas, and Robert Newton. The cameos included Buster Keaton, John Gielgud, Robert Morley, Marlene Dietrich and even Frank Sinatra.

Set in the 19th century, the story is about an Englishman’s bet that he could travel around the world in 80 days. The means of traveling around the world in this pre-airplane and pre-automobile era were by ships, trains, stage coaches, hot air balloon and even elephants.

If you get a chance to see this on the big screen or even a 4K Ultra HD or HD television, go for it..

Other contenders in 1956 included “Giant,” “The King and I” and “The Ten Commandments.”

I confess “The Bridge on the River Kwai” is one of my all-time favorite films, at least in my top 50. I like it so much that when I saw it was available on 4k Ultra HD, I ordered it.

It is a big screen extravaganza with big messages about the madness of war. Toward the end of the movie, a doctor calls what has happened “madness.” Directed by David Lean, one of the all-time great directors, his “Lawrence of Arabia,” which won another best picture Oscar in 1962, also showed a major character’s descent into madness. More about that in a future post.

The madness here is not just the Japanese forcing British prisoners of war to build a bridge, but a British colonel played by Alec Guinness who persuades the Japanese to let the British control the building of the bridge. The colonel believes that activity will keep up morale for his fellow British soldiers, whom had been ordered to surrender by the British hierarchy.

In the meantime, a former American prisoner of war (played powerfully by William Holden) who had escaped the inescapable island is recruited to join a British team that intends to blow up the bridge.

By the way, there is a great deal of similarity between the POW camp commanders’ warning/welcome to the new POWs in Bridge and the Klingon commander’s warning to Capt. James T. Kirk and Dr. Leonard McCoy in “The Undiscovered Country” when they arrive as prisoners on an icy planet that is known as being an alien graveyard. What the Japanese commander first warns and decades later the Klingon warns is that there are no guard towers because there is no need for them. If you check out the two scenes, you will be struck by the similarities.

The other contenders included (who didn’t really have much of a chance against Bridge) Peyton Place, Sayonara, Twelve Angry Men and Witness for the Prosecution. 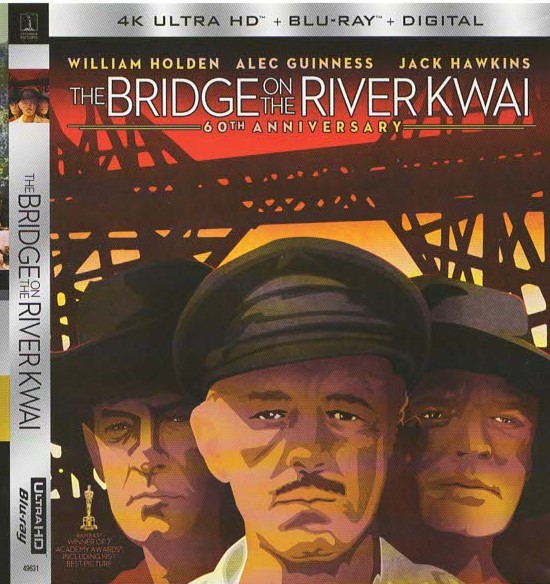 *A personal note: this writer believes unions have done much more good than harm, even though that doesn’t apply to all unions. The writer and his family members have benefited from what his father earned because of his union.