The creative teams involved in making the Best Picture winners from 1973-1977 feature “heavyweight” directors, actors, themes and, yes, even a movie about heavyweight boxers.

Many critics loved (with the exception of  Gene Siskel and Roger Ebert) “Butch Cassidy and “The Sundance Kid” starring Paul Newman and Robert Redford, but it didn’t win the Oscar for Best Picture.

When the actors teamed up again for director George Roy Hill’s “The Sting,” however, they won the Academy Award for Best Picture. This comic, caper film is filled with twists and turns in what in many ways is about getting revenge for a late friend.

The “sting” of a big-time racketeer pits brain against gun and brawn. The tale is told with the marvelous music of Scott Joplin and is bolstered by great acting.Others competing for the 1973 top honor included “The Exorcist,” “Cries and Whispers,” and “American Graffiti.”

For once a sequel is deserving of the honor of its predecessor. “Godfather I” won the Best Picture award and with the acting assistance of Al Pacino and Robert De Niro among others, director Francis Ford Coppola wins the honor again with this outstanding crime drama.

Of course, The Godfather movies are about more than crime. They were about families, culture and acceptance in a world that was resistant to letting them into the great American melting pot.

In this second movie, we witness a family betrayal and death, finding a way to gain political favors, the long-reach of one’s family in the old world, and revenge on the family’s perceived enemies.

Other competitors for the 1974 Best Picture honor included “Chinatown,” “The Conversation,” and “Lenny.”

One Flew Over the Cuckoo’s Nest, 1975, directed by Milos Forman

You would have to be “cuckoo” not to find something to like about “One Flew Over the Cuckoo’s Nest,” the 1975 winner of the Oscar for Best Picture. 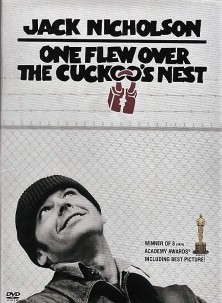 Based on the novel by Ken Kesey, (who became a counter-culture hero with his Merry Pranksters), “One Flew Over the Cuckoo’s Nest” is the beneficiary of a bravura performance by Jack Nicholson

The story is about a second-rate crook who pretends to be insane in order to avoid prison and be sent to what he expects to be an easier experience in a mental hospital. He proves to be an uplifting spirit for his fellow patients, but runs into a difficult adversary in the head nurse.

The cast is outstanding with several actors on the verge of stardom. That cast includes Louise Fletcher, Danny Devito, Christopher Lloyd, Will Sampson, and William Redfield.

“Rocky” is not only about a Philadelphia underdog boxer taking on the heavyweight champion of the world, it also is a testament to the behind-the-scenes story of unknown Sylvester Stallone getting the movie made, starring in his film and for it to win the 1976 Best Picture Oscar.

This was the first real sports movie to win the Best Picture Oscar even though “On the Waterfront” had a sports backdrop. The score is an uptempo joy.

The only problem with “Rocky” is that it led to far too many sequels.

Other contenders for the 1976 honor were “All the President’s Men,” “Bound for Glory,” “Network,” and “Taxi Driver.”

This semi-autobiographical film about his relationship with Annie/Diane Keaton is a whimsical comedy that takes on the issues of loneliness and love, family, communications, maturity, city life, careers and even driving.It’s filled with classic scenes including one with a lobster, one with Paul Simon, and many more.

As with most of Woody Allen’s movies, “Annie Hall” has a great cast. In addition to those previously mentioned, the cast include Allen regular Tony Roberts, Carol Kane, Marshall McLuhan (check out his sudden appearance while Woody is waiting in line to see a movie),

Another major plus for this movie was the cinematography of Gordon Willis, who also added his touch to Allen’s 1979 black and white visually and musically dazzling “Manhattan.”

The crop for Best Picture Oscar in 1977 was bountiful, but “Annie Hall” deserved the honor. Other contenders were “Star Wars,” “Julia,” “The Goodbye Girl,” and “Turning Point.”