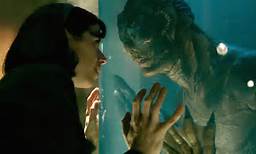 Each year after the winner of the Academy Award for Best Picture is announced, I immediately buy it, if I don’t already have it in my collection.

I didn’t see “The Shape of Water” in a theater, but my 4k copy arrived today. And tonight, March 21, I was treated to true cinema magic as this wonderful fantasy/science fiction/love story that even weaves a little sinister government “big brother” conspiracy into this amazing movie. And there’s a magical, musical segment that fits perfectly into this film.

Set in 1962 in Baltimore, we finally have a movie in which the creature has a happy ending. This film is almost an extension of “The Creature from the Black Lagoon,” but it is so much more.

I have a list (chiefly in my head) of movies that I call “Ronald” movies. They have a certain almost magical spirit that is so uplifting and inspiring.

The “Ronald movies” include Frank Capra’s “Lost Horizon,” “Field of Dreams” and “Cinema Paradiso.” There are others, but I am adding  “The Shape of Water” to that list now.

Having finally seen and written about the most recent winner, we’ll be continuing our posts about the previous best picture winners soon.